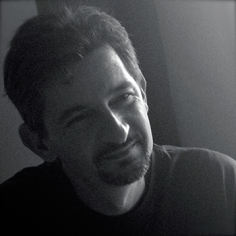 François Douziech began his music training from the age of six, learning classical guitar, followed shortly afterwards with the bassoon. He continued his studies and read music at the University of Rouen where he gained a Masters in Composition (under the direction of Jacques Feuillie and Jacques Petit). Thereafter, he qualified at the Sorbonne and was awarded a CAPES in Musical Education.

From then on his dedication to music evolved as a dual-purpose vocation : music education and composition. He teaches music at all levels from primary to graduate. Currently, François teaches sound techniques for the audiovisual degree BTS (Brevet de Technicien Supérieur).

Among his compositions are the following concert works :

- Miniature, for flute, oboe and harpsichord, commissioned by the Trio Niveli and premiered at the Moulin d'Andé in 1992.

- Ricercare, for strings and percussions, premiered in 1993 by the Regional Orchestra PACA at the Palais des Festivals of Cannes.

- Arabesque, for four guitars, premiered by the Quarte Blanche quatuor in Montpellier in 1995

François regularly works in collaboration with the pianist and composer Isabelle Donati and lent his participation in the following ventures :

- Writing and sound design of the multimedia show, Le Génie des Laumes, produced in 2002 at the Citadelle Vauban (Mozelle).

- Arrangement and orchestration of a children's opera, Pinocchio, premiered in Epinal in 2003

- Sound design and mixing of the multimedia choreography, Res Tremendae, performed at the Nice C.N.R. in 2009. 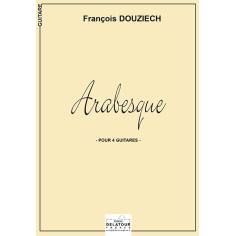 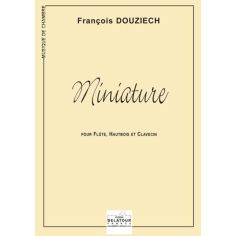 Miniature for flute, oboe and harpsichord

DOUZIECH François
DLT0454
€16.50
Miniature for flute, oboe and harpsichord
You need to login or create account