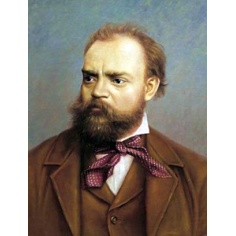 Following the nationalist example of Bedřich Smetana, Dvořák frequently employed features of the folk musics of Moravia and his native Bohemia (then parts of the Austrian Empire and now constituting the Czech Republic). Dvořák's own style has been described as 'the fullest recreation of a national idiom with that of the symphonic tradition, absorbing folk influences and finding effective ways of using them'.

Born in Nelahozeves, Dvořák displayed his musical gifts at an early age. After graduating from an organ school in Prague, he began writing his first composition at the age of 20. In the 1860s, he played as a violist in the Bohemian Provisional Theater Orchestra and taught piano lessons. In 1873, he married Anna Čermáková, and left the orchestra to pursue another career as a church organist. He wrote several compositions during this period.

Dvořák's music attracted the interest of Johannes Brahms, who assisted his career; he was also supported by the critic Eduard Hanslick. After the premiere of his cantata Stabat Mater (1880), Dvořák visited the United Kingdom and became popular there; his Seventh Symphony was written for London.

After a brief conducting stint in Russia in 1890, Dvořák was appointed as a professor at the Prague Conservatory in 1891. In 1892, Dvořák moved to the United States and became the director of the National Conservatory of Music of America in New York City, where he also composed. However, a salary dispute, along with increasing recognition in Europe and an onset of homesickness made him decide to return to Bohemia. From 1895 until his death, he composed mainly operatic and chamber music.

At his death, he left several unfinished works. Among Dvořák's best known works are his New World Symphony, the "American" String Quartet, the opera Rusalka and his Cello Concerto in B minor. Among his smaller works, the seventh Humoresque and the song 'Songs my mother taught me' are also widely performed and recorded. He composed operas, choral music, a wide variety of chamber music, concerti and many other orchestral and vocal and instrumental pieces. He has been described as 'arguably the most versatile...composer of his time'. 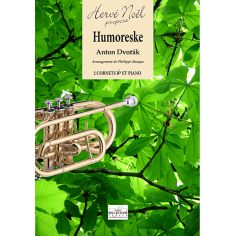 Humoreske for 2 cornets in B and piano

DVORAK Antonin
DLT1692
€16.00
Humoreske for 2 cornets in B and piano - Arrangement by Philippe BASQUE
You need to login or create account