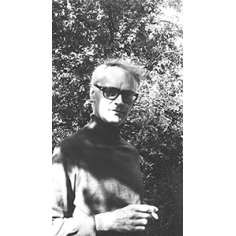 Léon Souberbielle was born in Paris on October 31, 1923. His father, Édouard Souberbielle, was one of the foremost organists of his time and a teacher of considerable influence. His mother, a violinist, a pupil of Armand Parent and Vincent d’Indy, was Leon Bloy’s daughter.

It is essential to be informed about this double, musical and literary heritage, in order to understand the singular nature of the work published herewith, that mobilized all the forces of its author for about ten years. Written partly “with four hands”, simultaneously with innumerable conversations and working sessions that Léon Souberbielle held with his father, it is also a meditation upon the shapes of the essential Beauty, upon the grand style. According to Léon Bloy this was not an ornament of thought, but the very condition of its upsurge.

The Plein-Jeu of the French Organ during the Classical Period was self-published in 1977. Its limited issue number contrasts sharply with the success that it gained in the circle of organists and specialists of the instrument. Ranking first among those, Pierre Hardouin and Norbert Dufourcq did not fail to acknowledge, both from a historical and organologic point of view, the importance of this work as well as the exceptional beauty of its layout. In later years, rumours spread among amateurs that it had become an unobtainable book, the scarcity of which underlined all the more its precious quality.

The Editions Delatour France have chosen honourably, some thirty years later, to extract this book from inaccessible shelves of public libraries. This may put an end to the mystery that it was veiled in. The almost clandestine character of the work was, in fact, the only reward for its author. But it is also right to say that he received a few recognitions which were compensations for him. Shortly before his death in Vendôme on October 24th, 1991, Olivier Messiaen had sent him the libretto of his opera Saint Francis of Assisi with the following inscription on the title page : “To Léon Souberbielle, the marvellous author of a great book”. 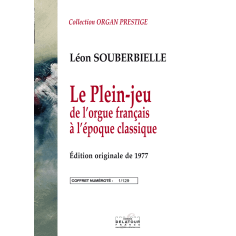