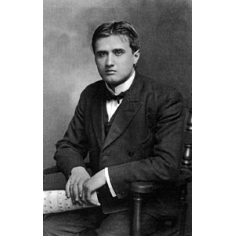 When Jay Becker, a retired banker who lives in Birmingham, Michigan, hears Brahm’s Ein Deutsches Requiem, his family’s treasured tradition of church music stirs in his heart. The tradition goes well back into the 19th century to the French province of Alsase where Jay’s great grandfather, Jean Baptiste Becker, grew up. The tradition includes a connection between Jay’s father, Rene L. Becker (see photo), and Brahms himself.

Jean Baptiste Becker lived on a farm, but he cultivated a love of music and became an accomplished musician and teacher. He passed this on to his children. All were trained from an early age in piano, violin and voice. His son Edouard really excelled, becoming the organist at the Cathedral of Chartres and later at Strasbourg Cathedral. This was in the 1860s and 1870s.

Edouard and his wife, Adele, raised a daughter, Lucie, and four sons - Edouard, Lucien, Camille, and Rene Louis - in the town of Bischheim, Alsase, France. Rene was born in 1882. It took most of Edouard’s income to raise the children and pay for their training at Strasbourg’s Conservatory of Music. Some noted musicians of the time were their teachers. Rene’s piano teachers, for example, included Ernest Munch whose son Carl became music director and conductor of the Boston Symphony Orchestra. Another was Fritz Blumer, a pupil of Franz Liszt. Rene studied advanced composition under Carl Somborn, a pupil of Joseph Rheinberger. His organ instruction came from Adolphe Gessner, a Swiss organist. Four of Edouard Becker’s five children went on to careers in music as performers, teachers, or composers.

The connection with Johannes Brahms? Once a year, Maestro Brahms came to the Strasbourg Conservatory to perform a piano recital. In the spring of 1894, young Rene L. Becker was chosen to turn the pages for the Maestro during the performance because of his high scholastic standing. It was the supreme honor for a conservatory student.

By 1900, the lure of America hit the Becker family and two of Rene’s brothers, Lucien and Camille, made their way to Saint Louis. Lucie, who had majored in violin, remained in the Strasbourg area as a music teacher and concert performer.

Rene stayed behind mainly to complete his studies and refine his interest in liturgical music. In 1904, Rene joined his brothers in Saint Louis and formed the Becker Conservatory of Music where he taught piano, organ and composition. He performed in concerts often and had his own first compositions published then. Camille died in his early twenties and Lucien, a member of FAGO, started a music school in Portland, Oregon. Neither brother had children.

Over the next forty years, nearly a hundred of Rene’s works were published, including three major organ sonatas, 15 masses, 25 piano solos, and 35 motets. Some of his works are still used by soloists and choral groups, despite recent modernization of church liturgies. These include his First Organ Sonata, Toccata in D Major, La Chatalaine, Melodious Studies, Two Etudes, and his Masses in honor of Saint Angela, Saint Felix Valvois, and Saint Francis Xavier. Rene’s published works also include compositions for violin and viola. Fischer Brothers, Schirmer, McLaughlin Reilly, and John Church have published his works. By 1908, Rene left his brothers and taught organ and music at Saint Louis University and Gregorian Chant at Kendride Seminary.

New impetus to Rene Becker’s professional career came in 1910 when he married Angela Landzettel. She was an accomplished musician in her own right. She was also devoted to the fine arts and did numerous oil and water color paintings and wrote poetry. Angela composed and had published by Theodore Presser several piano and organ compositions. The music from the pens and pianos of Rene and Angela in those productive early years of their marriage seemed relentless.

The couple moved to Belleville, Illinois in 1912, the year after their first child, Catherine, was born. Then came Rene Claude in 1913 and Francis in 1915, by which time they moved to Alton, Illinois where they lived for the next 15 years. While there, Rene continued to teach and compose and was the organist at Saint Peter and Paul Cathedral. Last but not least in the family came Julius (or Jay) who was born in 1929.

The Great Depression years were not all that difficult for the Beckers, especially in the wine and roses days of church music. In 1930, Rene became the first organist at the newly-built Blessed Sacrament Cathedral in Detroit, which was a center of a burgeoning interest in church and classical music in southeast Michigan. He held this post for the next thirteen years. He continued to teach music at home and in area schools, often giving lessons free during the depression years. Rene also gave lectures and concerts, and, he continued composing.

A member of the American Guild of Organists (Detroit Chapter), Rene helped to establish the Catholic Organists Guild. With his son Francis, he founded the Palestrina Institute to teach area organists Gregorian Chant and liturgically correct music. He played at the installations of Detroit Cardinal Mooney and Bishop Woznicki. After 1943, he moved on to Saint Alphonsus Church in Dearborn and was organist there until he retired in 1952 at the age of 70. Rene L. Becker died in 1956 after a long illness, leaving behind a lengthy legacy of music for his family, the church and the ages.

As before, the Becker family legacy was family policy. From their early years, all of Rene and Angela’s children had to learn a musical instrument. Rene Claude gave it up and went into banking. For Francis, music was a more serious affair. He was the organist at Saint Mary’s Church in suburban Royal Oak. In the 1950s, he was also organist and choir director at Saint Benedict Church in Highland Park, Michigan, near the family home. He and Jay sang together in the choir.

Daughter Catherine did not linger long in Detroit, moving back to Alton, Illinois to marry her high school sweetheart and to teach piano and voice. Jay continued with piano and organ and has had many music students. In 1957, Julius married Julia, newly arrived from Ireland and now a retired nurse and practicing psychologist. He went on to become a vice president at Detroit’s largest bank and was the organist and choir director at Saint Eugene’s Church in Detroit for many years. He has had a few compositions, but made no serious attempt to get them published.

When the Becker children were growing up, the study of music was fostered by Rene and Angela who taught all of them. Performance skills were polished at every opportunity, particularly through the many evening or Sunday afternoon “musical soirees” which Rene and Angela hosted for area musicians in their home on Connecticut Avenue.

After Rene and Angela died, the Becker family music tradition became more difficult to carry on. None of the their grandchildren got into music seriously, although several studied and play piano. Rene Claude and his wife, Helen, had two children, Pamela and Rene L., who now live in New England. Francis and his wife, Margaret, had no children. Catherine and her husband, Henry, adopted a daughter, Susan, now deceased.

The children of Rene and Angela Becker have since moved on to the eternal Cathedral of Music, all except for Jay. He and his wife, Julia (or Sheila), now live a somewhat quieter life in Birmingham after raising two daughters, Margaret and Catherine. Jay is quite active in the nearby Holy Name Church choir and still makes music his mainstay. He has been in the bass section of Rackham Symphony Choir since 1977. In addition to the voluminous family music library at home, Jay also maintains the Rackham Choral library. The Choir, which this year is observing its fiftieth anniversary, has been one of the Detroit area’s premier choral organizations. It had been the official choir of the Detroit Symphony Orchestra for many years and now often performs with the Michigan Opera Theatre Chorus.

Jay Becker is the last surviving musician in his family and preserver of the family’s music tradition. Everywhere in the Becker home there is music by the score, including many old yellowed ones, published and unpublished - rich reminders of the life works of Rene L. and Angela Becker. The first thing one sees and hears upon entering the Becker home is the piano. Sixteen years ago at his granddaughter Catherine’s wedding, the strains of Rene L. Becker’s “Missa Salvator Noster” reverberated through Blessed Sacrament Cathedral for the first time in many years. That joyful moment is high on the list of Becker family memories, along with the day Jay’s father shared the stage with Johannes Brahms. The family’s treasured album of enduring music accomplishments remains intact.

ABOUT THE AUTHOR OF THE ARTICLE

Gene Scott, a retired public relations writer and educator, lives in Livonia, Michigan with his wife of forty years, Barbara. They have four children and eight grandchildren. Gene has been active in choral groups and church choirs in Pennsylvania and Michigan for fifty years, including the Eintracht Singing Society of Pittsburgh, Rackham Symphony Choir, Vanguard Voices, and more recently with Madonna University Chorale. He has authored history books on Michigan Centennial Towns, Detroit’s early villages and old neighborhoods, and is currently researching revived ghost towns in Michigan. 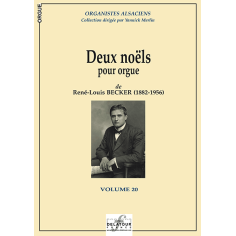 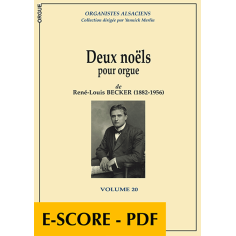 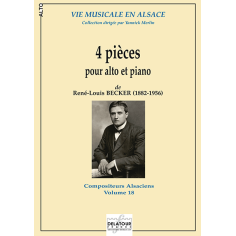 4 pieces for viola and piano 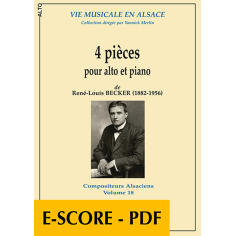 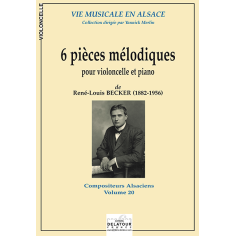 6 pièces mélodiques for cello and piano 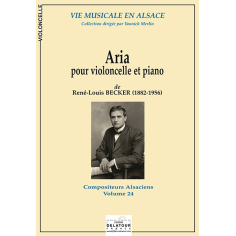 Aria for cello and piano 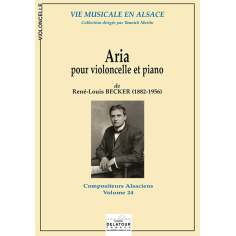 Aria for violin and piano 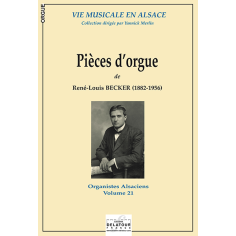 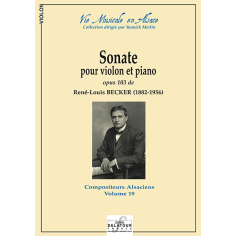 BECKER René-Louis
DLT1730
€23.50
Sonate for violin and piano
You need to login or create account