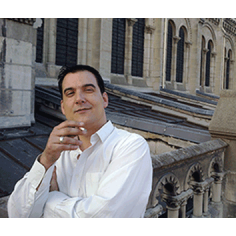 His many solo and ensemble concerts have taken him to numerous European countries and to the United States. He has played and recorded for radio and TV and has taken part in several TV documentaries about the organ and about music in general.

Amongst his many recordings, he has recorded and published the complete works of Dynam-Victor Fumet. He is the organist of Notre Dame de la Croix in Paris, where there is a historic Cavaillé-Coll organ.

He is also involved in the international journal Organ and for the IFO classics records label, Paris.

He is in charge of a specialist collection of organ music, published by Éditions Delatour, France, Vie-President of the Institut Louis Vierne and is university professor in History of Art. Frédéric Denis has won the first prize of the Charles Oulmont Foundation for Music and the first prize of the Fondation de France. 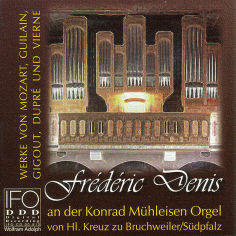 DENIS Frédéric
CDT0008
€12.50
Frédéric Denis at the Konrad Mülheisen organ in Bruchweiler
You need to login or create account